Vacant for more than a year, the building was in foreclosure. A large number of the windows were shattered, and most of the doors cried out to be replaced. Much of the original wood had fallen victim to the insatiable gluttony of Lowcountry termites. There was no central heating and air conditioning, no appliances, the wiring was in desperate need of the expertise of an experienced electrician and, for at least a year, the only residents of the building had been stray cats – lots of them. In short, the spacious but oddly-configured structure was a mess, maybe even a candidate for demolition.

It was exactly what Rita Langley had in mind when she went looking for a permanent home for herself and her three sons. 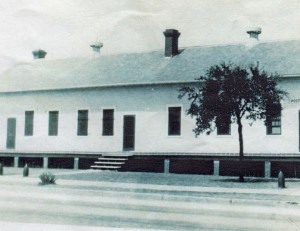 Built near Fort Moultrie by the U.S. Army sometime between 1897 and 1915, the house at what is now 1618 Middle St. on Sullivan’s Island is part of a military complex that was added to the National Register of Historic Places in 2007. Langley hoped to spend no more than a few years transforming what had been a warehouse and then the post quartermaster’s office into a home near the beach for her family.

That was 1992, and much has changed since then for Langley. She got married, added to her family, retired from a 30-year teaching career and ran a successful campaign for a seat on the Sullivan’s Island Town Council. Her home has seen vast changes over the years; little remains the same save the solid slate roof that has covered the building since its Army days. And, well into its third decade, Langley’s renovation project rages on with no end in sight.

“I wanted to renovate an old house,” Langley explained.

“My first house was a 1950s brick ranch, but I’ve always been interested in historical property. And we wanted to live near the beach. The first time I saw this house, I said, ‘This is it.’”

She’s still tweaking, seeking perfection for the home that captured her imagination 23 years ago. Not long after she and Milton Langley were married – they exchanged their vows in the living room of the post quartermaster’s office – she remembers her husband asking: “Next time, can we renovate something a little smaller?” She apparently planned to finish the work sooner, but her quest has has continued, one summer project at a time during her lengthy teaching career.

“I thought we could get it all done in two years,” Langley said. “But the house has grown with us. As always, Milton has been very patient with me.”

By the time Langley and her sons moved in, a former owner had divided the post quartermaster’s office into three apartments. Today, Milton and Rita Langley and their 17-year-old daughter, Sydney, live in a five-bedroom – one downstairs and four upstairs – 3,800-squarefoot house that in the past has been home to a lawnmower repair shop and a print shop. They rent out a three-bedroom apartment that, like Sullivan’s Island’s former Town Hall next door, was part of the original building.

When Langley first moved in, she hired a contractor to repair the termite damage, move some walls and doors, replace the glass in the windows and doors, hang sheetrock, bring the plumbing up to snuff and paint the cypress siding on the outside of the house, which, she said, had been “an ugly pale green.”

After about six months, the Langleys took over most the work themselves, much of their effort aimed at return-ing the building to its original state. For instance, a former owner put up walls to cover beams and built a closet to hide the chimney, reminders of the past that now are exposed, as they were early in the 20th century. The wood floors upstairs have been there since the building’s Army days. Downstairs, some of the floors are original, while others have been replaced, in some cases with linoleum, then later with another layer of wood.

Besides remodeling the kitchen, moving, adding and subtracting walls, painting, paneling, replacing floors, fixtures and the heat and air system – eight times – the Langleys have created a patio made of reclaimed brick behind the house and built a kitchen cabinet with wood that once covered the walls in the adjoining room. Langley is especially proud of the tiling work she did in an upstairs bathroom.

“Some of the house looks more like it did when it was military than when we bought it,” she said.

The house at 1618 Middle St. is part of the Fort Moult-rie Quartermaster and Support Facilities Historic District, which includes a group of buildings constructed by the Army beginning in 1897, among them a non-commissioned officers’ club, a theater, a storehouse, a barracks, two warehouses, a dispensary/provost marshal’s office, the quar-termaster’s dock and the post quartermaster’s office, now the Langley home.

The Army sold the buildings when it abandoned the complex in 1947. When Langley purchased her house, it had four different addresses between 1610 and 1620 Middle St., depending on whether you asked the lo-cal utility companies or the U.S. Postal Service. In fact, Langley pointed out, in the beginning, she was constantly receiving mail that was supposed to go to Town Hall next door. She finally determined that the address would be 1618, and apparently the post office went along with her decision.

So when will the work be completed at 1618 Middle St.?

“Never,” Langley stated with conviction. “It’s a labor of love. But as I’m getting older, I’m not as excited about do-ing the work as when I was younger.”

And how much money have the Langley’s poured into their decades-long project?

“It’s better not knowing,” she admitted.