When people think of Fort Moultrie, what usually comes to mind is the iconic 18th century fortification, complete with cannons and bunkers. But during World War I and World War II, the fort expanded to include 200 acres and was home to hundreds of servicemen and their families. Just like any other U.S. military installation, a number of auxiliary buildings were vital to the daily lives of the post’s residents. One such building that remains is the movie theater, built in 1930. 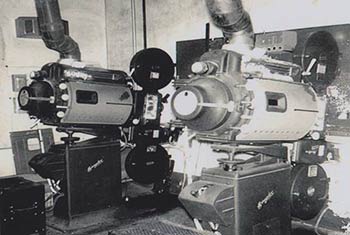 Walter Duane, a longtime island homeowner, remembered going to movies there as a child over 80 years ago. His family did not live at the fort, but he said the theater was open to island residents, too.

“Once the soldiers were in the theater, the box office was open to the general public. Sometimes, soldiers would even buy a book of 30 tickets for $3 and sell some of them to civilians,” he said.

Duane said a different movie would be shown every day, but just once per day.

“They showed first-run movies, before they were in theaters in the city, so it was really great. I remember seeing “Rebecca,” a really popular movie of the time, before my friends in the city got to see it,” he said.

Another island resident, Roy Williams, remembered that during the war, “going to the movie theater on post was a big deal. I went with some trepidation, as I was only there as a guest, since my father wasn’t in the service. I recall seeing a movie about the life of Woodrow Wilson. I didn’t even know who he was but it didn’t make any difference to me – it was a movie! I didn’t care what it was!”

Williams also remembered on one occasion, his cousin had a date with an officer from the fort.

“We watched them as they walked from the house toward the theater. The young man was shipped out shortly thereafter, and my cousin later got word that he had been killed in the war,” he said.

After the war, the federal government sold many of the buildings that had been part of the military compound, including the theater. Hal Coste, a lifelong islander, said island residents Kenneth and Harvey Wrixon owned the theater when he worked there as a boy in the 1950s.

“Other island kids worked there, too. We did anything that needed to be done – helping the projectionist, cleaning up and other odd jobs,” he commented.

Coste’s friend, Tom Proctor, grew up nearby and both men reminisced about seeing many popular movies at the old theater: “The Blob,” “The Ten Commandments,” “South Pacific,” The Tingler,” “God’s Little Acre.” Another islander, Andy Benke, said “The movie which really stands out in my mind from the mid-60s was the classic “Endless Summer.” The movie made such an impression because it set the tone of the lifestyle and passion of surfing. And according to Proctor, the balcony was a popular place for young couples who had their eyes fixed on things other than the featured film.

Deborah Cochelin described the theater by the 1960s as “a dumpy place, but it offered a place for entertainment that was a short bicycle ride from home where you could hang out with friends.” By then, the featured films were targeted toward children. Frequently, movies were sponsored by RC Cola, and a bottle cap was required for admission.

According to Rev. Lawrence McInerny, who grew up on the island, “We were allowed to bring our own bags of popcorn from home. However, one rule was no soft drinks, for safety reasons. In those days, there were no canned soft drinks, just bottled, and nobody wanted broken glass on the floor. A very good friend of mine, however, had a way around the soft drink rule: He’d get a grocery bag, pop the popcorn, put a Coca-Cola in the middle of the bag, then surround the Coke with popcorn. Of course, he’d have to smuggle in a bottle opener, too.”

Rev. McInerny remembered “during the Centennial of The War Between the States, a John Wayne movie, ‘Horse Soldiers,’ was shown. When the Confederates jumped out of the cattle car to surprise the Yankees, the whole theater burst into cheers and whistles! Actually, just about every movie was ended with enthusiastic applause by the audience of excited children.”

Decades ago, a new owner converted the old post theater to personal use. But a large mural depicting the stage’s curtain is painted on the front of the building, serving as a reminder of childhood memories for many. Perhaps the mural can draw newer island residents to reflect on their own youth. Or, maybe, as Rev. McInerny mused, “We could use a little theater here.”

Labor of Love: At Home in the Post Quartermaster’s Office