There’s a secret treasure hidden somewhere in Charleston, buried just 3 feet beneath the ground. It’s gone undiscovered for more than 35 years, silently waiting for someone to piece together the clues.

In 1982, fantasy author Byron Preiss published “The Secret: A Treasure Hunt.” The book, ostensibly a tale of Old World faeries’ immigration to the Americas, was actually a unique genre of puzzle known as an “armchair treasure hunt.” Preiss had traveled across America the year before, armed with a 6-foot shovel, on a mission to bury 12 ceramic casques in locations known only to him. His book contained a series of cryptic paintings and verses which, when paired properly together, could guide his readers to the secret locations. From there, one would only have to dig up the casques to claim a precious gemstone prize.

The first casque was unearthed in Chicago, only a few months after the book’s release. From there, more than 20 years passed before the next casque showed up, discovered in Cleveland in 2004, just before Preiss was killed in a tragic automobile accident. But even though the location of the remaining casques was lost after his death, Preiss’ widow has stated that she has all the gems and would issue rewards for any found casques. Over 35 years later, the hunt is still on.

I first learned about “The Secret” in 2017, which makes me a mere rookie among the book’s dedicated community. When I heard that one of these treasures was thought to be buried in Charleston, my pulse quickened as I set about researching the clues. 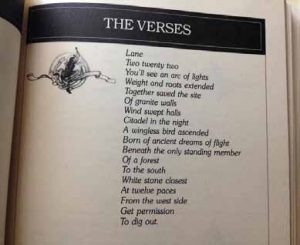 That small map in the mask’s forehead? It’s an overhead view of the Charleston peninsula, possibly even a reference to Edgar Allan Poe’s story “The Gold-Bug.” That hanging pendant near the bottom? It’s drawn in the same dimensions as Fort Sumter. And that sweeping cypress branch, bending across the entire image? A 1980s road map confirmed it’s a near-perfect overlay of Ben Sawyer Boulevard! And since this puzzle is built around an African theme, all signs pointed directly toward Sullivan’s Island. After all, the majority of African slaves entering America passed through the port of Charleston and were quarantined along these shores.

But while the painting provided a general location, the accompanying verse pinpointed an exact spot to dig. Preiss sketched out the island’s history in poetic verse, including how British cannonballs bounced off the soft palmetto walls of Fort Sullivan. Chief Osceola’s gravesite also earned a mention, as did a monument to an ironclad, the USS Patapsco. But the final location eluded searchers for decades – and for good reason. A single tree was the “X” which marked the spot, at least until Hurricane Hugo blew it down in 1989. It took several long weekends of scouring the National Park Service’s photo archives before I was finally able to spot the puzzle’s “missing link.”

Since then, I’ve been working with the staff at Fort Sumter National Monument, with the goal of somehow recovering the casque. They’ve also (quite correctly) pointed out that “if ” Preiss had buried a casque anywhere on Fort Moultrie, he would have been violating at least a few federal laws. And since I have no intention of doing that myself, or disregarding the author’s explicit instructions to obtain permission, it looks like I’ll have to be patient for now. NPS may be able to have its archeologists properly examine the area, but that process is neither quick nor easy.

In the meantime, I’m satisfied with having stood 3 feet above a real-life buried treasure. … but, you know, these casques aren’t technically found if they’re still in the ground. And there’s always the chance that my “solution” is wrong, so let me invite you to take a look at “The Secret” for yourself. This puzzle always has room for more searchers. And even if neither you nor I ever manage to get our hands on the lost treasure of Byron Preiss, at least we’ll have shared a small part of this epic adventure. 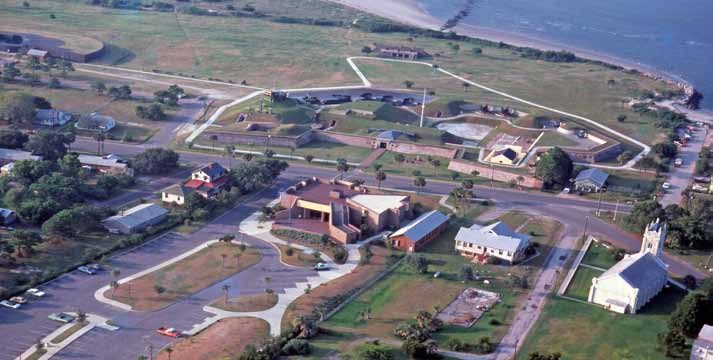