There are not hotels on Sullivan’s Island, and, in the beginning, there was no reason to build one. But for the better part of four decades, Charlestonians and other visitors stayed at the Atlantic Beach Hotel, soaking up sun on the beach during the day and enjoying the sound of waves lapping gently against the shore at night. 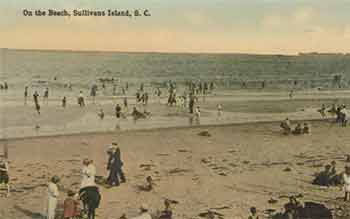 The barrier island’s recorded history dates back to the late 17th century, when sick people and the dregs of society were sent there to separate them from the general public. Many travelers to the Charleston area, slaves and free persons alike, were quarantined on Sullivan’s Island until it could be determined that they were free of disease. They lived in pest houses, or lazarettos, a far cry from the stately hotel that eventually was to grace the island.

In the late 1700s, the federal government, which owned the island, began leasing parcels of land to people who were willing to build there, and several beach houses were constructed. Under the terms of the leases, however, the properties could be reclaimed by the federal government at any time. This issue didn’t go away until legislation in 1953 granted property holders clear title to the land on which they lived. 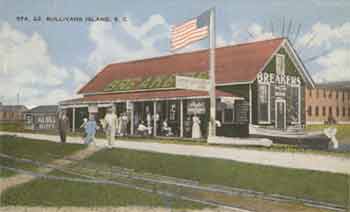 Despite its somewhat unsavory history, Sullivan’s Island was later viewed in a much more favorable light, and the barrier island became a popular vacation spot for Charleston residents seeking a respite from busy city life. To accommodate these vacationers, the New Brighton Hotel was built on the island in the 1880s.

Many people owned homes of their own on Sullivan’s Island, but, as the island’s popularity grew and a trolley began making regular trips from Charleston and Mount Pleasant, a need arose for a hotel. The New Brighton Hotel, later known as the Atlantic Beach Hotel, was built on land given by the town of Moultrieville – the main government entity on the island at the time – to Robert Chisolm for the expressed purpose of constructing a hotel. The property, known as Ocean Park, stretched across the island from the front to the back of the beach, near what is now Station 22 and bounded generally by Middle Street, I’On Avenue and Atlantic Avenue. 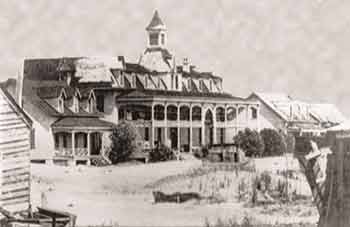 The hotel’s doors officially opened on June 10, 1886. Its owner, J.F. Burnham, prepared for months for the grand event, which began with a promenade concert performed by an orchestra led by Bostonian W.L. Hardy, followed by a “concert and hop.” The hotel became a popular resort and included three beach cottages in addition to the main building.

Disaster struck on Jan. 9, 1925, when the hotel and one of the cottages burned to the ground. The two remaining cottages are still on the island today. According to legend, the fire was started by a bootlegger who was trying to find his whiskey in the bushes alongside the hotel. He lit a match in the dark, providing the spark that destroyed Sullivan’s Island’s last hotel.

Although the island is without a hotel, there are several large beach houses that the owners rent to vacationers. A small commercial district offers some interesting dining opportunities. The beaches are public, and the island still attracts visitors from Charleston and beyond.