The average Jan. 1 morning in the Lowcountry consists of adults nursing their hangovers and watching bowl games. Others show up at the gym to begin working on their New Year’s resolutions. But a few hundred others – sometimes more, sometimes less, depending on the weather – don their bathing suits and flock to Dunleavy’s Pub to start the New Year off right: by parading around in ridiculous costumes and running into a relatively freezing ocean, surrounded by a thousand or so onlookers.

Dunleavy’s Polar Bear Plunge informally started about 25 years ago and has grown into a legendary annual occasion that brings in $30,000 to $40,000 in donations for the Special Olympics, according to Sandye Williams, director of development for Special Olympics South Carolina. My husband, Scott, and I will be there yet again this year, and it will be lucky plunge No. 13 for us.

When people learn we are die-hard polar bear-ers, we get looks I imagine skydivers and bungee jumpers might receive, but the majority of friends we’ve convinced to give it a try wind up coming back year after year. Others remain adamant that we are crazy to voluntarily jump into freezing water, though they’ve still never tried it. Here’s what it’s like from a polar bear’s perspective.

We pack as lightly as we can – towels and warm, dry clothes that are easy to put on quickly – and show up wearing costumes related to whatever funny theme our team has come up with for the year, with bathing suits underneath. We make our donations to the Special Olympics and then post up somewhere outside with Bloody Marys and cold beers and watch as the other polar bears begin to arrive.

The people-watching is one of my favorite parts; there are the groups who show up in the same costumes each year like the “Shiny Happy People,” clad in skivvies and covered from head-to-toe in gold sparkles; the human-beer-pong team, a man being chased by someone in a polar bear suit; and, of course, the Dunleavy family, dressed to the nines in white tuxes with Irish-green bowties and cumberbunds. There are superheroes, men dressed like ladies, brave women in bikinis, kids wearing Halloween costumes and every clever current-event ensemble you can imagine. 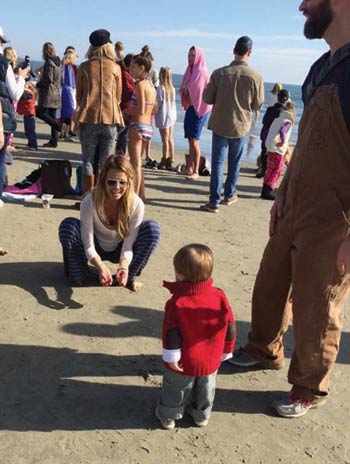 Bill Dunleavy and his family lead the crowd in a half-mile parade to the beach. That’s when the excitement begins to build – it’s usually cold, and peeling off layers down to a bathing suit in the frigid air stirs the adrenaline. Those who don’t plan to swim line up to watch, while the brave – or crazy – couple hundred polar bears gather together, shivering and jumping up and down as one unit, perhaps to stay warm, perhaps out of nervousness and eager anticipation and, from my perspective, all of the above. The crowd is bigger on “warmer” days, and scarily small on days like last year’s when the wind chill was 20 degrees.

“I can’t believe I’m doing this,” probably goes through the minds of most during the 10-second countdown before everyone runs into the water. The sand is cold and hard on bare feet, and, as you splash into the water, it gets harder to run because you can’t feel your toes. And when you reach your ultimate destination, the cold water takes your breath away. The rule with my team is that we all have to get our hair wet, so committing to going underwater is perhaps the most challenging part of the day – until you get out. On colder days, the walk back to your towel can seem like a thousand miles as the wind stings your wet skin.

The silver lining is that it doesn’t take long to warm up – after all, it was only a quick dip, and the invigorating feeling that you started the New Year off clean and refreshed in a “baptism” of sorts, conquered fear and did good things for a good cause makes it all worthwhile. It keeps us coming back every time. See you in the water!

Dunleavy’s Pub: In the Heart of the Action