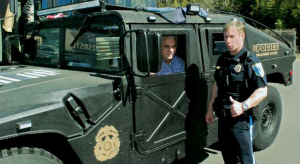 Christopher Griffin has always wanted to be a policeman, to serve his fellow citizens not only as a law enforcement officer but also as someone who can be counted on to help in a variety of situations. He apparently attained his dream job in January 2018, when he was sworn in as the Sullivan’s Island police chief. He plans to stay a while. “I won’t leave here unless I have no … END_OF_DOCUMENT_TOKEN_TO_BE_REPLACED