I grew up in Florence, and we did not, to my knowledge, have coyotes around in the 1980s or early ’90s. Sure, I watched Looney Tunes – and always sympathized with Wile E. Coyote when his antics went horribly wrong – but I never saw a real one in our midst.

Nowadays, many folks on Sullivan’s Island have a different story to tell. For the last several years, the coyote population on the island has been, well, more fruitful than anticipated, given the fact that coyotes are not native to the Carolina coast. Reasons they have ended up on the island are still uncertain. Yet 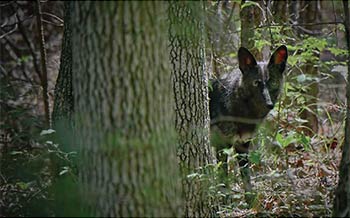 according to Josephine Humphreys, author and lifelong local on Sullivan’s, this would not be the first time that an unusual animal has turned up.

“I think there’s been changes to island wildlife because of the accreted land,” she pointed out. “It draws animals, because there’s less land in other places. Hogs for example – we found two piglets in the surf a couple of summers ago. One didn’t make it; one got away and became enormous. We also see whales now and then. There was a right whale and its baby once – my husband saw them while fishing. He was terrified to move.”

While Humphreys has seen only two coyotes in person – one standing in front of the Episcopal Church and one crossing a street – her neighbor, Stanford Kirshtein, has captured many on his wildlife camera.

“I learned of coyote sightings back in 2013,” he said, adding that he himself recalled seeing “a strange creature crossing Middle Street in 2012.”

“I had a country home in Walterboro where I would get pictures of deer and raccoons with a camera, so I thought I would try that again,” he explained.

Kirshtein set up the camera in his yard, and the resulting footage has proven that these beasts are indeed walking among the locals, feeling remarkably at home. However, the mystery of why they showed up and even what kind of coyotes they are is still being pondered.

“Sometimes I’m driving at night, and I see eyes,” Kirshtein said. “But more times than not, [the coyotes] are out of sight. They’re secretive, and they tend to stay away from people.”

One scientist in particular, Dr. Christopher Mowry, an associate professor of biology at Berry College near Atlanta, is making it his business to understand coyotes and their expansion to the Eastern Seaboard with his organization, The Atlanta Coyote Project. In fact, a few of Kirshtein’s videos featuring Sullivan’s Island coyotes have made it into a recent Atlanta Coyote Project documentary.

“I’m an animal ecologist, and my students and I became curious about coyotes in the early 2000s,” Mowry said. “I began studying them more and giving lectures, and all of us realized the public was interested. There was not a lot of information out there.”

Most of the coyotes on Sullivan’s Island are darker in color, an appearance shared by other Eastern coyotes. According to Mowry, the trait, known as melanism, exists in coyotes, wolves and dogs alike.

“We’re learning more about genetics,” he said. “Coyotes and gray wolves share some genes – but that does not mean they’re mixing currently. These darker coyotes have probably been dark a long time. It was more of a historic phenomenon as they moved east.”

As you read this article, DNA samples from Sullivan’s Island coyotes are in the hands of scientists at Princeton University. The research program, known as Canine Ancestry, collaborates with The Atlanta Coyote Project for the purpose of discovering lineage.

“They do great things at Canine Ancestry,” Mowry said. “And the local government officials of Sullivan’s Island, at our request, trapped a couple of the coyotes and helped us get the tissue samples.”

Meanwhile, the people on Sullivan’s Island have mixed emotions regarding their coyote neighbors. While coyotes are solitary hunters and aren’t known to aggressively approach people, that doesn’t change the fact that these wild animals could pose a threat. And though there’s no proof that coyotes have killed or injured domestic dogs and cats, some residents blame them with certainty.

“On September 3 of last year, I posted a video of seven coyotes, a family, on my You Tube channel,” said Kirshtein. “I saw all kinds of heated reactions to that post in the comments. So if you bring the coyotes up in conversation, you’ll get diverse opinions. On one hand, they are predators. But they’re smart and beautiful, too.”

“As humans, our presence is conducive to coyotes,” Mowry added. “And we should learn to live with them. The coyotes fill a niche – they control the rodent population, and they control Lyme disease, often carried by ticks on mice.”

As useful as coyotes are, precautions should be taken. “We can control numbers by limiting their access to food,” said Mowry, pointing out that coyotes continue to breed when they have resources.

“Garbage, compost, outdoor pet food and overfilled bird feeders that might draw rodents are all things to keep tabs on,” he noted.

Will Sullivan’s Island continue to have coyotes? Signs point to yes. While no one is sure how the animals ended up on Sullivan’s Island – Did they swim or did they walk across the bridge? – they are not likely to leave anytime soon. Although Kirshtein’s video did not show much activity over the winter months, Mowry said it is common for younger coyotes to “disperse” at that time of year.

“I doubt they’re gone,” he said. “The younger animals leave and look for their own territories, while the older moms and dads plan another litter. So in some ways it’s not that unusual not to see them [in the winter months]. But they made it to the island and are here to stay. And a peaceful coexistence is possible.”

Hmm, we couldn't find anything.