Take a second and think back to what it was like to turn 7 years old. Remember the anticipation from the minute you woke up, the growing excitement as balloons and streamers filled the room and, most important of all, the uncontainable joy of opening a mound of presents?

Wilson Yarborough, a first-grader at Sullivan’s Island Elementary School, turned 7 on Aug. 13. He celebrated the occasion at a superheroes-themed pool party with Marvel plates and masks, lots of games and a large pile of presents. By most accounts, it was the kind of party any 7-year-old would dream of, except for one thing: Wilson didn’t get to keep any of those presents.

Instead, they went to MUSC Children’s Hospital, where anticipation and excitement are in many cases fleeting emotions. This was not the first time Wilson gave his presents to kids who might never know the joy of being the guest of honor at a birthday party. He did it last year, too, and his older sister, Georgia, now 9, chose to donate her presents when she was in kindergarten and first grade.

“I thought it was nice,” Wilson said. It’s as simple as that. The parties and the donations were orchestrated by Mount Pleasant-based Teacups and Trucks. Corrie Silvers, the company’s founder, said in the six years the business has been throwing parties, the Yarboroughs are the only kids who chose to give their gifts away.

Silvers said more than 40 toys were donated to the hospital from Wilson’s parties alone. The 7-year-old did get presents from his parents, grandparents and cousins, so he did not give up gifts altogether. Still, Silvers said it is especially rare for kids his age to make the choice to share with others. She pointed out that children who opt for philanthropy generally are older – 9- to 12-year-olds – and usually ask guests to donate to causes such as the Charleston Animal Society or a food drive. Asking guests to bring presents for other children is unique, she said. 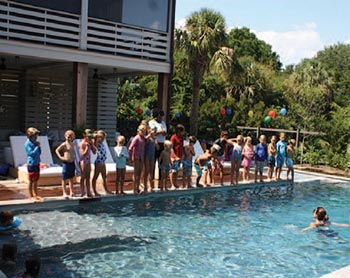 when she often found herself in children’s hospitals and saw firsthand the need for toys. She realized that they could help and brought up the possibility of donating some of their gifts to children in need, even before the opportunity presented itself through Teacups and Trucks.

“We are so fortunate to have things that a lot of children don’t,” she said. “It’s something that we always talked about. We started donating during the holidays instead of exchanging presents with our close friends.”

When the Yarboroughs presented the idea to Wilson and Georgia, they encouraged them to think about it empathetically. They explained that children with medical problems do not get to have a big birthday party or gifts and asked them to consider how they would want someone to do the same for them if they were in the hospital.

The Yarboroughs also took their kids to the hospital, where they met with nurses who explained where their gifts would be going and how they would be helping children in need. Wilson added MUSC’s online wish list of needed items to the invitations to his birthday party, along with a request that guests bring unwrapped toys for kids at the hospital.

In Wilson and Georgia’s case, Jessica Yarborough said they were completely willing to make the sacrifice.

“It wasn’t like a fight or I had to struggle with them to do it,” she said. “They don’t ask any questions. They’re happy to do it. They understand that they’re trying to help someone.”

Remembering the Saturday Night Skating Rink: “A Place for Kids to Go”

(Not) Made in Manhattan